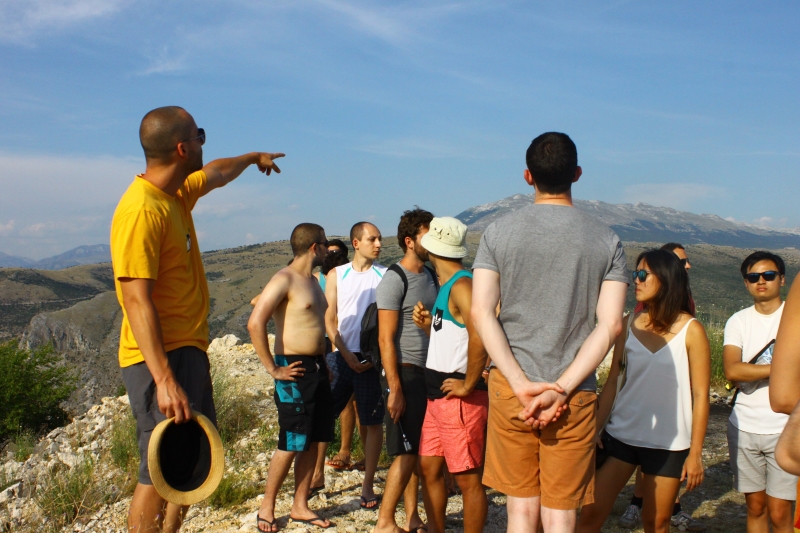 Mostar is a city rich in history and culture, and there’s no better way to experience it than on a walking tour. Our friendly and knowledgeable guides will take you through the streets of this fascinating city, sharing its stories and legends along the way. You’ll see all the major sights, from the Old Bridge to the mosques and churches, and learn about the city’s turbulent past. So why not come explore Mostar with us?

Join the walking tour with one of our guides and listen as she/he shares his personal experiences giving you insight and understanding of the people and culture.

Walk with our guide on a trip through time, listen to interesting facts along the way, starting with the early civilizations inhabiting these regions, through different periods, including the Ilirian Tribes, Romans, Bosnian Medieval Kingdom, Ottomans, Austro-Hungarian, and modern times, including the demise of Yugoslavia.

All of these periods in history were marked by conquest, rebellion and courage of warriors and ordinary people. The tour is designed to allow you to understand the history of the region, the different intertwining cultures and underlying conflicts. It will help you understand about the people that lived here in the centuries long gone, as well as about the people that live here now.

Following the guide, you will see the Kujundžiluk, the street leading to the old town, with shops of traditional artisans displaying unique timeless works of art. Continuing down the cobbled street, we reach the Old Bridge, the iconic symbol of Mostar, built more than 500 years ago. While here, the guide will tell you more about the bridge, when it was built, what it was used for, what meaning it had to locals, and finally when it was destroyed and then rebuilt, pouring hope back in the hearts of people of Mostar.
After the talk, if we are there in the right moment, we can see a member of the Divers Club Icary performing a traditional jump from the top of the bridge in the same way the brave young boys of Mostar did for the last 500 years.

Sign up now to recieve hot special offers and information about the best tour packages, updates and discounts !!

Looking for the best way to celebrate the holidays this year? Look no further! Our special 25% off offer is just what you need. Sign up now and take advantage of our latest deals on tour packages, updates, and discounts. It’s never been easier to plan the perfect holiday celebration. So don’t wait – sign up today!